SynerTech has a goal of increasing the awareness of gender diversity issues in technology.  This is our second of several installments on this important subject.   It will mainly cover the successes of women in tech along with an overview of some of the better organizations that provide direct support to women in technology.

The Problem and Opportunity

Gender diversity has created immeasurable benefits in  every industry that has fully embraced it.  In IT, it’s a viable argument that the lack of diversity is holding our industry back from full potential.

Solving the Equation: The Variables for Women’s Success in Engineering and Computing

Getting Worse, Not Better:  Despite all of the heightened awareness, the situation is getting worse.  The percentage of women in computing occupations continue to fall. 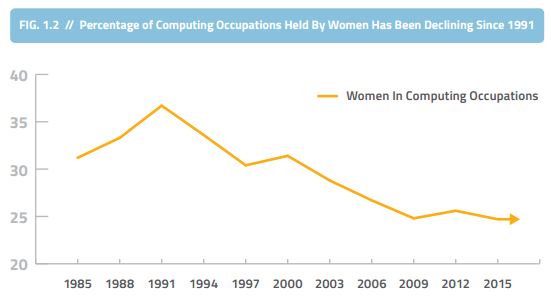 A Few of the Benefits and Successes of Women in Tech

Women’s code rates are better than men’s, but rejected when their gender is revealed

In what the authors are claiming is the largest-scale study of gender bias to date, researchers in the US have found that code written by female programmers is rated more highly than code written by men.

But this higher rating – based on code acceptance from other coders – is lost when female programmers publicly identify their gender online, with acceptance of their contributions then falling below the acceptance level of code written by men.

Women Who Run Tech Startups Are Catching Up

Stocks Perform Better if Women Are on Company Boards

Shares of companies with a market capitalization of more than $10 billion and with women board members outperformed comparable businesses with all-male boards by 26 percent worldwide over a period of six years, according to a report by the Credit Suisse Research Institute, created in 2008 to analyze trends expected to affect global markets.

Some Effective Forces for Change

We start with a focus on children.  The key reason is that by their teen years, many girls have already started making up their minds about of technical subjects.  To have a meaningful impact during or after the teen years means that you often need to attempt to change their beliefs and perceptions first.

The Hour of Code:   HOC has helped  250 million kids write more than 11 billion lines of code.

This our overwhelming favorite. it’s goal is to demystify writing software by showing grade school children, and particularly girls, that anyone can write software code.  It does this with hour long video tutorials done by people like the lead developers for Minecraft, Star Wars Games, and Angry Birds.  Students can use an Icon Based language, basic Java Script, and other languages.

It’s also important because of easy accessibility and it’s grass-roots nature.  Most of these efforts are carried out by organizations who promote coding and host events using the Hour of Code Site – at virtually no cost to the promoting organization.

With the split being about 50/50 between boys and girls, their approach seems to be working.

( We also encourage you to view some of the videos and maybe even try your hand at writing some Minecraft code.  They are a lot more engaging and entertaining than you might think.  Yes, even for you seasoned developers. )

Girls Who Code:  GWC has introduced more than 40,000 girls to coding.  It’s geared toward girls in grades 6 – 12 and operates mainly through schools by offering after school hour sessions and summer immersion programs.

The process of hands-on involvement is a little more involved than Hour of Code.  To start a club, they  appear to prefer those who have an affiliation with a school, university, library, community center, faith-based organization, or non-profit.  They also want sponsors to secure a certain amount of space for the club and want laptops provided.  They don’t allow tablets.

The active clubs in Minnesota are: Totino-Grace High School, Northfield Middle School, and the University of Minnesota.

Made With Code:  At about the same time as Google publically announced that only 17% of its tech employees are women, it launched Made with Code and committed $50 million to the project.

In addition to presenting a variety of ways software is used, the site includes a variety of coding projects, and learning videos with women instructors.

The job of encouraging girls to engage with Made With Code is mainly with parents and educators.

Other resources for girls to explore software development.

Scratch:  Scratch is a language created by MIT specifically for children.  The site offers programing challenges and enables kids to interact with other Scratch developers around the world.

Graphite:  A good link site for parents and teachers who want to encourage kids to explore coding.